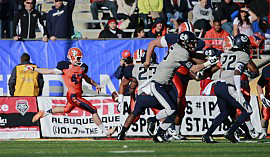 Jay Mattox has been a client of Van Hook Sports Performance Training for over 4 years and played at Las Vegas High School. Our sports trainers are ecstatic at his success.

Jay Mattox made his start as punter for the Miners as the squad took its first road shutout since 1988. UTEP defeated UTSA 34-0 with the stellar performance by Mattox as he registered four punts inside the 20 for a total of 323 yards on seven attempts (46.1 avg.). In the second quarter the punter took two strikes and put the ball at the UTSA six both times. In the third quarter Mattox gave the UTEP defense great field position by placing the ball at the Roadrunners two and eight. The sophomore held the Roadrunners to 13 total yards in punt return on two attempts and the longest return was for four yards. The punter helped the Miners defense hold UTSA to only two first downs and only 70 yards. The kicker went on to post a career long 47 yard field goal in the third quarter giving the Miners a 27-0 edge over UTSA. The last time a Miner register a kick that long was in 2011 against Southern Miss. Mattox’s made both field goal attempts of the night. The specialist also posted seven kickoffs for 432 yards (61.7 avg.)

Image Does Not Exist